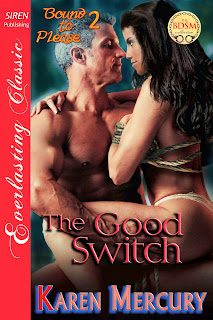 Natasha Woolf’s delinquent teen son is giving her nothing but headaches.  Enter Ari Braverman, politician turned powerful food critic, and she welcomes the help.   Ari is a charismatic, cultured silver fox in an expensive business suit, and Natasha wants to restore order to the chaos that has become of her life.  Ari’s brand of domination equals security and safety for her.
After a nasty breakup in Washington, DC, Ari hesitates to accept a new submissive.  But he discovers the spitfire restaurant owner has a feisty side that refuses to offer total surrender, and he’s surprised that her rebel play turns him on.
When his old girlfriend Kelly pops up begging to reconcile, Ari sends the ex-sub packing.  Kelly worms her way into the graces of politicos supporting his Congressional bid, with deadly intentions for the sub who has taken her place.  Natasha must fight tooth and nail to prove she is…THE GOOD SWITCH 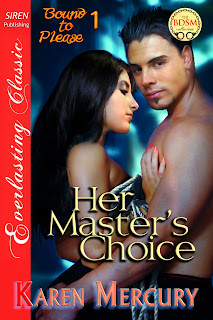 
Tate instructs Shannon in a thrilling new realm of private—and public—play, pushing her limits with every new scene.  Shannon discovers that her inner “Force-Me Queen” is an expert tease, skilled at keeping Tate on the edge.


But a creepy stalker has photos and threatens to expose Tate’s cover and their back alley scenes.  Tracking down the culprit brings the couple closer than ever in their power plays, and Shannon learns that breaking out of her comfort zone is an arousing adventure when it’s Her Master’s Choice.