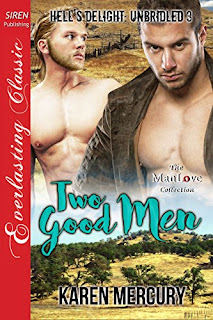 Everyone's just looking for two good men.
Dodge Hendy, aspiring animal orthotist, is shocked and yet oddly thrilled by what he sees through Kingsize Taylor's window. The recently divorced, bicurious Dodge is open to newcomers.

When King comes to the hotel to apologize to Dodge, they stumble across two dead bodies that cry out for their assistance. They can't leave this case unsolved. Rodeo star Kingsize Taylor is swept away by Dodge's untouched beauty. King is ready to settle down and create a home with another man, but is skittish about Dodge's ten-year-old son Ryan. He's never been monogamous with anyone that had a kid before. The plot thickens when they follow the main suspect to the gay rodeo.

Dodge, like the suspicious fumigator, is deathly afraid of being outed in a politically correct world. But in his journeys with King through the underbelly of bawdy night clubs and forensics labs, Dodge realizes he's found the man everyone looks for.

Note: This book is written in first-person point of view. 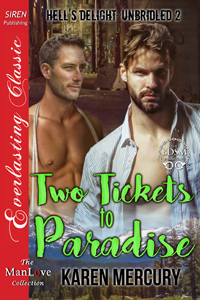 [Siren Everlasting Classic ManLove:Erotic Alternative Consensual BDSM May/December Romance, M/M, bondage, sex toys, spanking, HEA]
Father Arlo Fleming has been transferred to Hell's Delight as punishment for breaking the Church's unspoken rules. He loves working with the downtrodden, those living on the edge. But when Con Dawson asks him to the river to discuss opening a youth center, Arlo didn't expect to have half a body on his hands.
Medical examiner Dr. Lorenzo Hamerelli reluctantly teams up with Father Fleming, fully aware he's powerfully attracted to the older, salt-and-pepper Scotsman. But “Hammer” has just been burned by a lover who denied his own nature. The last thing he needs is to fall in love with a priest.
Dom Arlo wants someone who will push back, give him a run for his money, and Hammer fights his inner urges with his last breath. But sparks fly when the obedient Hammer caves to his passion for the virile priest. They journey through the back alleys of Hell's Delight, running into pot farmers, moonshiners, and, ultimately, murderers.


Note: This book is written in first-person point of view. 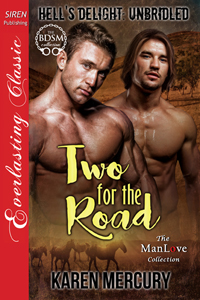 What happens when two Doms clash, each one trying to get the upper hand?

Balthazar:  The serene life on the range at Hardscrabble Ranch came to a sudden end when my sister vanished.  I switched from being a rough and ready cow boss to a sleazy detective in the Hell's Delight underbelly, putting clues together to find her.

Why did I let that lean, mean fireman Oly partner up with me?  He stands for everything I crave and everything I fear.

Olin:  I've lived a closeted life in Northern California until returning to Hell's Delight.  I want to dominate that sinewy cowboy Balt, to force him to comply with me in nasty and wicked scenes.  I'm backed up against a wall when I find out Balt wants the same dirty things—to dominate and control.

The serial killer trail is growing hot.  There's no time for childish battles.

Never give the devil a ride. He’ll always want the reins.