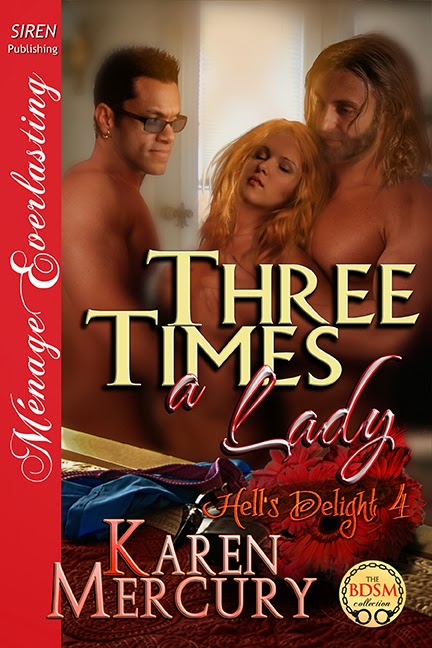 #4  Three Times a Lady, February 2014
Buy At Amazon
Attorney Autumn Chamberlain is falling in love with Noel Butler all over again—or was she ever out of love with the world-famous heart throb rocker?  Fourteen years ago, Noel’s cheating heart made Autumn weep.  Now they’re both back in Hell’s Delight, Autumn taking care of her father suffering from Alzheimer’s, and Noel with a secret from Autumn…and the world.
Ewan Nash thought he’d hide away, running the Hardscrabble cattle operation after his son was kidnapped.  But when Noel Butler returned to his hometown to write songs, Ewan came out of his tragic shell.  It’s more than a one-night hookup for the two men, but the successful, bountiful attorney Autumn seems hell bent to dash Ewan’s heart onto the rocks again.
The three unlikely lovers unite when a criminal Autumn prosecuted comes to life again, murdering army veterans.  The plot thickens when Autumn falls equally as hard for the cowboy Ewan, but the solution might be right in front of her eyes. 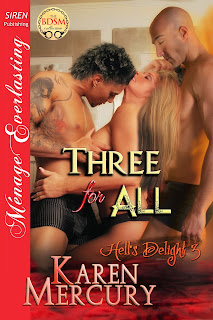 Widowed Hannah O’Loughlin can’t believe the two hottest men in Hell’s Delight seem to want her.  Colt Gatling owns the Lay-Z-Boy Ranch that she tried unsuccessfully to buy.  She should hate Colt, but is drawn to his powerful physique and dominant ways.  And tattooed sex toy shop manager JD Harmon is a dangerous showstopper with his erotic gypsy eyes.
Hannah doesn’t want to burden JD and Colt with her old baggage.  She needs to restore her reputation after her husband was murdered in Montana, but a whackjob with a bad mullet, Roscoe Flantz, is pinning  the blame on her.
You can’t keep a good man down, and JD and Colt race to protect Hannah from the unfashionable stalker who insists that all he wants is her dead husband’s plastic dinosaur.  JD and Colt are hell-bent to prove to Hannah that they love her, even with past baggage.  They’re in it…Three For All. 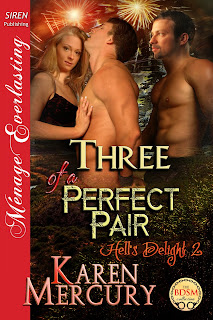 They’re at it again in the hamlet of Hell’s Delight.  Katrina Abramson, recovering from a nasty breakup, is hosed by firefighter Alex Coldiron during the annual Fourth of July water fight between rival fire companies.  She is sprayed right into cattleman Shane Jonas, on the run from his past.  He has returned to confront his future.
Town reporter Alex knows Shane wants to mend fences with brother Devin and plans to write a heartwarming article.  Instead he’s thrust into a passionate triangle with the amorous couple, and Alex must face the truth about his sexuality.  Katrina is swept into a thrilling power exchange with the two men where no one is ever sure who has the upper hand.
An exotic, shady character from Shane’s former life is lurking in the shadows, spying on their play sessions, and Shane's dangerous past is about to come full circle. 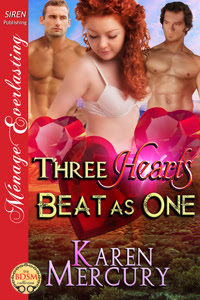 In Hell’s Delight at a Valentine’s Day charity auction, newly-divorced Lacey Dvorak is won by two smoking hot—but unfortunately gay—merchants.  She is pleasantly shocked to discover the bidding was no empty gesture.  The men have been looking for a third woman to complete their union.


But when Lacey’s cheating ex gets wind of the new lovers’ arrangement, his wounded pride leads him to a hateful campaign of vengeance against Chase’s store, and the sleazy mayor uses his leverage to get his heart’s desire Devin to do his bidding.


Don’t they know?  Cheaters never win, at least not in Hell’s Delight.